A few years ago I heard about OpenMP. It's a form of multi-threaded programming meant to make good use of multiprocessor and multicore hardware.

Earlier this year, I read Anatomy of High-Performance 2D Similarity Calculations, which used OpenMP as part of their Tanimoto search algorithm. This summer, Kim Walisch contributed OpenMP variations to my popcount benchmark.

The changes to the code were almost trivial, so I asked Kim if he would help me add OpenMP support to chemfp. He did, and it will be part of the upcoming 1.1 release.

OpenMP is only one of many ways to make effective use of multiple processors. Another common way is through POSIX threads, or its equivalent on Windows. A third is to spawn off a new process and use IPC to communicate with it.

How do these techniques compare to each other?

I decided to use Python 3.2's new concurrent.futures module to handle the multithreaded and multiprocess cases, or rather, the backport to 2.x. This merges the underlying "threading" and "multiprocessing" APIs into a common form, based on the "future" concept for asynchronous programming. I quickly found that the multiprocess API had too much overhead so I won't talk about it.

I don't actually save the 12,295,483,225 values. For one, simple symmetry reduces that to 6,147,686,170 values. For another, in the problems I'm interested, I can ignore similarities below a threshold. Instead, chemfp internally uses a sparse matrix format.

For this test I used a simple parallelization. I break up the rows of the matrix into bands, and fill in the parts of the upper-right triangle which are at or above the threshold. In the OpenMP version, all the OpenMP threads work on a single band. In the concurrent.futures version, each thread processes its own band. These differences fall naturally out of the how those two APIs work.

Once I got both implementations working, debugged, and optimized, I could finally do some performance numbers. I wanted to see how OpenMP and pthreads scale over a range of processors and range of threshold values. My desktop has two dual-core CPUs, so I decided to rent time on a "High-CPU Extra Large Instance" Amazon EC2 node. It has 8 nodes of the form:

Sadly, this is not a machine which supports the POPCNT instruction, so the chemfp popcount code fell back to Imran Haque's SSSE3-based implementation.

The machine has about 6GB of free memory. I knew from testing on my desktop that I only needed 4.1 GB for the worst case, so I didn't run into memory problems.

You can get the raw data if you're really interested. I used matplotlib to make a couple of 3D plots. First, here's the overall times: 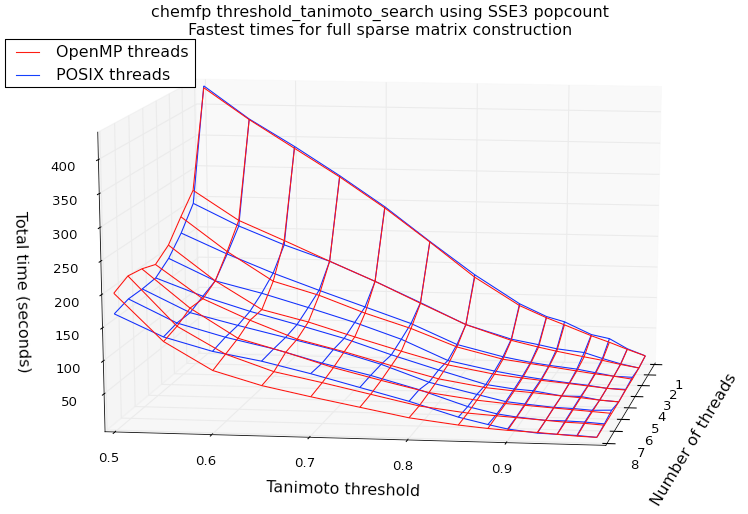 You can see that the OpenMP code (in red) is usually faster than the pthread code (in blue). The exception is for thresholds of 0.55 and lower. BTW, a threshold of 0.5 finds 285,371,794 matches in the NxN matrix, which means this stores a few gigabytes of data. 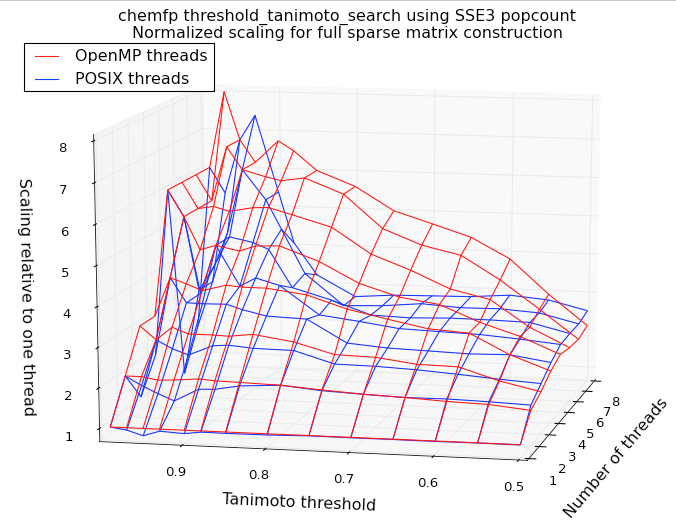 The region near threshold=1.0 is so jagged because the search time is less than the variability in the system, and is close to the minimum time resolution size of 1 second.

Most people in this field use thresholds in the range 0.7-1.0. It's obvious from this graph that OpenMP is the right solution. It's almost always faster, and overall it makes much better use of a multi-core machine.