The following is a rough retelling of my presentation for the Testing in Python BoF at PyCon 2010, including removing some in-jokes relevant only for that session. On the other hand, I expanded it to include working code. This means you, yes you, could work on this. It's not for the faint of heart. Have fun! And let me know what you think.

Code coverage is a good thing. I want to do branch coverage. Last year Ned Batchelder added branch coverage support to coverage.py, which works by analyzing the byte code. I want to see if there's a better solution through an entirely different approach.

Let me introduce you to Python's "ast" module.

It's an interface to Python's internal Python parser so program can convert string containing Python code into an abstract syntax tree (AST). The ast module contains some code to display the contents of the AST as a string. I've reformatted it to fit my slides as otherwise it's a long string. I can also ask it to display the position information, which is the second True in the following.

You can use the ast module to build a tree directly, without parsing a string, then compile and execute that code.

"ast.fix_missing_locations" is a helper function to assign missing position information the compiler needs when generating byte code. I end up using it and "ast.copy_location" a lot, which copies the location information from one node to another.

The mystery of the wrong TypeError

What's the bug with the following?

The code correctly raises a TypeError, but it's the wrong TypeError. I've made this mistake a few times, which is why I try to remember to check the contents of the exception during my tests. Notice that unittest doesn't help here, since assertRaises only checks the exception type, and not the content.

It is possible to check all of these manually. You could defer the calculation to a "check_mod()" function

Rewriting the AST for fun (and profit?)

The ast module has some support code for creating a new parse tree based on transforming another parse tree. I can transform all "%" binary operations to call a function for the left and right sides. Here's a non-working but mostly complete version of how that might look.

What's missing is the code to define or import check_string. I'll leave that for later. For now, just get the idea that you can parse Python code to an AST, rewrite it in order to instrument certain parts, then execute the result.

I ran something similar to this against the Python standard library and tests, in the hopes that I could find an bug. It took a lot of hands on fiddling, since some essential Python modules cannot be instrumented because the full path wasn't fully defined. I got it to work, and found no bugs. The closest was this code from difflib.py

where the comment is needed because otherwise the reason isn't immediately obvious. While not a bug, it perhaps does show you that the test revealed something. (Oh, and it also showed the several hundred tests that the standard library does to test string interpolation failures.)

Take a look at this program. I've used coverage.py to run the program and annotate the code to display the coverage and highlight the lines which weren't executed. 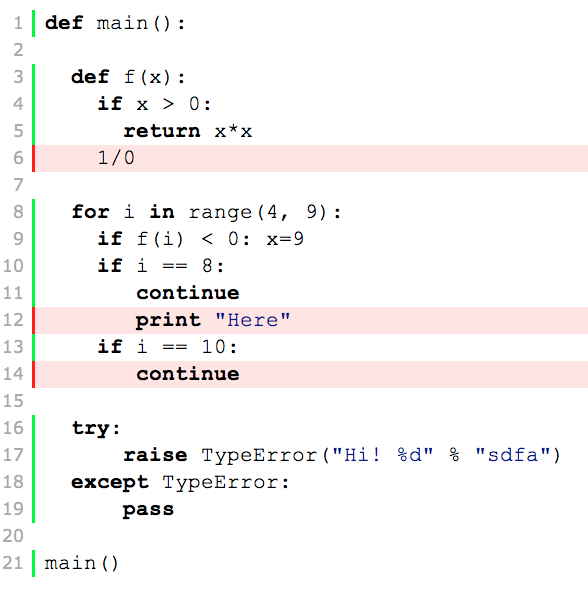 You can see there are a other few problems which coverage did not test. Line 9 never executes "x=9" and the "raise TypeError" in line 17 is never reached, because of the string interpolation error in the parameter list. I've hacked together something over the last 30 hours to show that something better is possible.

I want to generate coverage for this statement: I'll do that by parsing the code into the AST then rewriting the AST so it's equivalent to:

The "register_module" function is something I'll write in a bit. It will take a filename and two location dictionaries. The first dictionary is for statements like assignment which are supposed to go to completion. That is, code before it and after it are supposed to execute. (Compare this to 'return', which will never allow code after it to run. That's what the second dictionary is used for.)

The key is a unique identifier associated with each statement with a coverage test, and the value is the lineno and col_offset pair which come from the AST.

The ast_enter and ast_leave dictionaries here are default dicts (though that's an implementation point). The "0" is same unique identifier in the location dictionary, and can be used to say that the statment at line 1, column 1 (col_offset starts with 0), was reached and left.

At this point someone in the audience astutely asked why I used an "if 1:" in the above. That's a limitation of how the ast.NodeTransformer works. It lets derived classes tranform a single term to a single other term, which means I need to transform a single statement (the assignment here) into a single other statement, and not three statements. I chose the "if 1:" because it's easy to write, it can contain an arbitrary number of sub-statements, and because Python's byte compiler knows how to optimize away the "if 1:" test.

If you think about this approach, the run-time overhead is pretty low, but it's a lot more than simple assignment. I don't know how it affects real-world code. Remember, it's been 30 hours since I started this, and I'm at conference as well.

Instrumenting the AST for code coverage

The next step is to automate all of this: convert a .py file into an AST, instrument the code to add these coverage checks, implement the reporting mechanism as an atexit hook, and for good measure, add the "%" TypeError check. To see if this is effective, convert the AST to byte code and save it to a .pyc file.

This calls for a horrible hack around a call to compileall.py. I've named the result "ast_compileall.py"

I placed this file in "spam/testing.py" I then compiled all of the .py files in the 'spam' directory with and I made sure the following was on my PYTHONPATH as "ast_report.py" (While I used an atexit hook here, I did that because it was the fastest way to get to a proof-of-concept solution. Really I think this should be more like how coverage.py works, with a command-line script which sets up the run environment and reports the results at the end.)

This coverage code will only work on modules which were imported, where the .pyc file is used instead of the .py file. (But perhaps an import hook would be useful or at least interesting here?) What I do is import the module via the command-line

You can see that it reports the string interpolation without a problem, and if you look closely you'll see that it catches that the "if" on line 9 is executed while the "x=9" also on line 9 is never executed.

There's also some problems. Line 4 reports that the code was entered 5 times and never left, but that's a bit of a false positive since it left through a return statement. I think now, after additional thought, that the better solution is to put the "leave" test on the first line of each possible branch.

There are some great advantages to this approach.

There are some difficult problems as well. Consider:

And just how should someone visualize all this extra data?

I talked with Ned some after my presentation. He pointed out that the complex part of coverage.py, which he's worked on a lot during the last year, is to make the system configurable so it can be told which coverage to ignore. I know what he means. In the late 1990s I added the "#pragma: no cover" option to the early form of coverage.py, which exists (although not my actual code) to this day.

If coverage works on a more fine-grained level, how do you suppress the false warnings so the true issues aren't hidden in the noise?

I'm not the only one who has thought about instrumenting the AST, even in Python. (The Lisp community likely thought of this before I was born.) What I've hoped to do here is explain it well enough so that you can figure out how this approach works and come up with ways to extend it for the future.... or figure out why it fails.

If you are doing that, do bear in mind my python4ply package. It contains a full grammar definition for Python using PLY, with support for the decrepit AST from the compiler module. Potentially you could use it to have Python 3 generate an AST for Python 2, or even vice versa, with a lot more work.

Or, if you have both money and interest, perhaps you'll fund me? I am a consultant, after all. I mostly work in computational chemistry and my clients aren't interested in this sort of deep language analysis, so I only work on this during rare intervals. It's not only money, but access to people who want these sorts of capabilities and can give me feedback on what they want and how effective a solution is.

Or, if you want to work on it yourself - feel free! I hereby release all of this code to the public domain, and disavow any copyright interest in the code expressed in this article. You don't even have to mention my name. Just develop good testing tools.

I know there are a number of tools in the greater world of computing which can work on ASTs. I have no experience with them. Perhaps it's best to convert the Python AST to some other tree grammar where there is a tree manipulation language? When I'm feeling crazy I think "just convert the AST to XML then use XSLT to add the instrumentation, and convert the resulting XML back to an AST." How sane is that? And it would mean I would have to learn a lot more about XSLT. Or what about ANTLR's tree grammars? But then there's Manual Tree Walking Is Better Than Tree Grammars. It's a Brave New World.

I thank Armin Rigo, Brett Cannon, Grant Edwards, John Ehresman, Jeremy Hylton, Kurt Kaiser, Neal Norwitz, Neil Schemenauer, Nick Coghlan, Tim Peters, Martin von Löwis and everyone else who worked on the ast module. Without them this would be a much harder problem.